Team Redback is pleased to announce the achievement of two key milestones in the validation of systems integration for its Redback Infantry Fighting Vehicle (IFV). 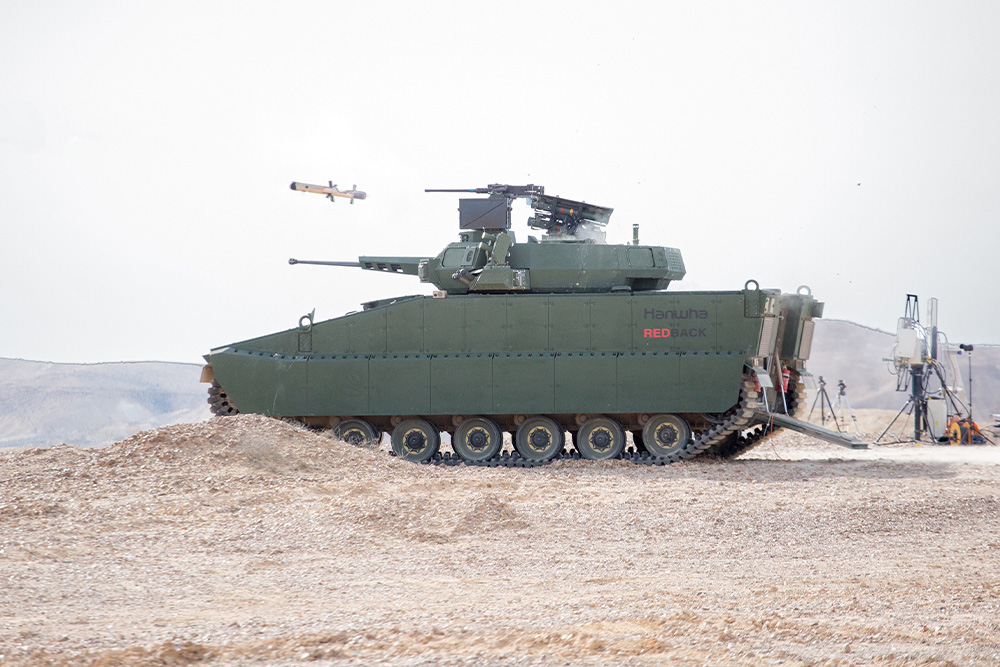 Team Redback, led by Hanwha Defense Australia, has been formed to deliver best of breed Australian and global technologies to military customers, including the Australian Defence Force. The Redback is under consideration by the Commonwealth under an ongoing tender process for Project LAND 400 Phase 3.

These teaming arrangements are focused on making the Redback IFV the safest, most effective vehicle possible.

The Iron Fist active protection system (APS) was successfully demonstrated in late 2020, and several SPIKE LR2 missiles were successfully fired from a Redback vehicle in earlier this year. Both tests were conducted in Israel.

“The Redback turret was designed from the very outset to integrate advanced technologies such as Iron Fist and Iron vision and Anti-Tank Guided Missiles” said Mr Gal Raviv, Managing Director of Elbit Land Combat Systems. “The turret is designed to easily integrate these advanced systems as you cannot achieve optimum performance for the vehicle and crew with bolt-on systems.”

The successful tests are key milestones in the validation of the Redback’s offensive and defensive protection systems.

The Iron Fist APS allows the Redback to detect, classify and defeat a range of threats. It uses integrated radars and electro-optics to detect threats and then defeat them using two double barreled launchers mounted low on the turret to provide optimum coverage and avoid interference from other systems and roof hatches.

The SPIKE LR2 is a state-of-the-art anti-tank guided missile (ATGM) that builds on the global success of the SPIKE family of ATGMs. The Redback turret includes an integrated two-round SPIKE launcher.

“This firing is the last in a series of SPIKE LR2 tests from our turret and concludes the successful integration of the SPIKE LR2,” said Mr Raviv. “I am very pleased to say that the turret and missiles functioned perfectly and scored direct hits on all targets.”

“I am enormously proud of Team Redback and the significant progress we have made,” said Mr Cho. “These two significant demonstrations of successful complex systems integration on the Redback give me absolute confidence in the team and our pathway to complete the remaining validation work.”